Business Intelligence (BI) is an essential tool in helping finance professionals add value to their organisation.


This event would be helpful to anyone who wants to:
Areas of business that the talk would be advantageous for are:


Peter Simons is a CIMA member who had over 30 years experience in business before joining CIMA as a member of staff in 2006.
The CIMA qualification enabled Peter to achieve career progression through roles in strategy, corporate lending, credit management and marketing at Bank of Ireland. He was the head of a division and on the bank’s senior management team in London when he left in 2002 to become the Managing Director of an entrepreneurial small business.
Peter is now the technical specialist in the applied research unit in CIMA’s education department. He works with employers, consultants, software vendors and academics to explore the future roles of organisations’ in-house finance professionals. He also helps to develop CIMA’s expertise in performance management. Peter’s research contributes to the development of the CIMA syllabus and he works with colleagues across CIMA’s value chain to support members

To book your place, email Julie Witts at Julie.Witts@cimaglobal.com

Posted by Paul Hooper-Keeley at 07:28 No comments: 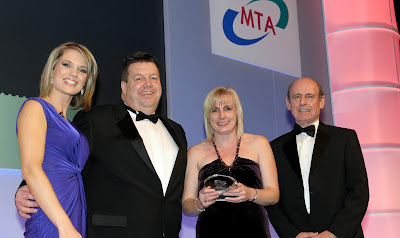 The announcement was made at the MTA Annual Gala Dinner (held at the ICC in Birmingham on 27th March 2013) and the award was presented to Jeff Hart (CNC Training Academy Manager) and Karen Early (CNC Academy Trainer) by Sky News’ Charlotte Hawkins who hosted the event and awards presenter Professor Alan Myers, University of Huddersfield..

The award for best Industry Training Provider, unlike some awards where entries are judged by a panel of experts, was decided by a public vote and relied on previous course attendees from all shortlisted training provider companies to cast their votes online.

“I am delighted to have received the award on behalf of the CNC Training Academy team.

“What’s more gratifying however is that previous Academy course attendees took the time and were motivated to vote for us. I think that demonstrates the positive experience they had from attending our courses, and that they valued the training that was delivered.

“I’d like to thank everyone who voted for us and for their continuing support.”

Established in 2010, the CNC Training Academy provides high-quality, professionally-delivered and cost-competitive CNC Programmer and Operator training to precision manufacturers in the UK and Ireland and, increasingly, to unemployed adults looking to retrain and find employment in the manufacturing sector.

Over the last three years the CNC Training Academy has seen interest and take-up of its basic and advanced Fanuc, Heidenhain and Siemens CNC Programmer courses and its range of specialist courses soar.

In 2012 demand for its courses hit an all-time high with over 425 people from some 170 different companies being trained at the Academy’s modern, state-of-the-art facility in Leamington or off-site at customers’ premises).

All indications suggest that 2013 is well on its way to being the best year ever for the Academy.

“There has been an increase in demand for all of our courses (from basic right through to our advanced and specialist courses), and our new, short introductory Milling and Turning Programmer and Operator training courses are proving very popular.

‘Reading between the lines it would appear that many UK and Irish manufacturing companies have invested in training to improve the skills of their people and to help them cope with and capitalise on the continuing economic upturn being experienced in manufacturing.

Their need for professionally-delivered, high-added value training is leading them to select the CNC Training Academy as their training provider.’
Posted by Paul Hooper-Keeley at 02:22 No comments:


I recently saw the following piece from David R. Kamerschen and certainly feel the spirit of this story highlights how those with the broadest shoulders are already bearing the greatest burden within our tax system with the pips in danger of being squeezed too hard.......

“One of our team in Europe shared this with me so I felt compelled to re-post as its relevance here in the US, and people enjoy a good real-world demonstration of economics.

Suppose that once a week, ten men go out for beer and the bill for all ten
comes to £100.

If they paid their bill the way we pay our taxes, it would go something
like this: -

So, that’s what they decided to do.

The ten men drank in the bar every week and seemed quite happy with the
arrangement until, one day, the owner caused them a little problem. “Since
you are all such good customers”, he said, “I’m going to reduce the cost
of your weekly beer by £20. Drinks for the ten men would now cost just
£80.

The group still wanted to pay their bill the way we pay our taxes. So the
first four men were unaffected. They would still drink for free but what
about the other six men? The paying customers? How could they divide the
£20 windfall so that everyone would get his fair share? They realized that
£20 divided by six is £3.33 but if they subtracted that from everybody’s
share then not only would the first four men still be drinking for free
but the fifth and sixth man would each end up being paid to drink his
beer.

So, the bar owner suggested that it would be fairer to reduce each man’s
bill by a higher percentage. They decided to follow the principle of the
tax system they had been using and he proceeded to work out the amounts he
suggested that each should now pay.

Each of the last six was better off than before with the first four
continuing to drink for free.

But, once outside the bar, the men began to compare their savings. “I only
got £1 out of the £20 saving,” declared the sixth man. He pointed to the
tenth man, “but he got £10″

“Yes, that’s right,” exclaimed the fifth man. “I only saved £1 too. It’s
unfair that he got ten times more benefit than me”

“That’s true” shouted the seventh man. “Why should he get £10 back when I
only got £2? The wealthy get all the breaks”

“Wait a minute,” yelled the first four men in unison, “we didn’t get
anything at all. This new tax system exploits the poor”. The nine men
surrounded the tenth and beat him up.

The next week the tenth man didn’t show up for drinks, so the nine sat
down and had their beers without him. But when it came time to pay the
bill, they discovered something important –they didn’t have enough money
between all of them to pay for even half of the bill.

And that, boys and girls, journalists and government ministers, is how our
tax system works. The people who already pay the highest taxes will
naturally get the most benefit from a tax reduction. Tax them too much,
attack them for being wealthy and they just might not show up anymore. In
fact, they might start drinking overseas, where the atmosphere is somewhat
friendlier."